Who Is Who: Boris Nemtsov 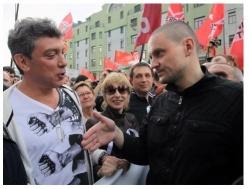 Boris Nemtsov, who was shot dead in Moscow late on February 27, was well-known as an oppositional leader and one of the main figures to harshly criticize Russia's politics as led by President Vladimir Putin.

Until his unexpected shocking murder Nemtsov was a member of Regional Parliament of Yaroslavl Oblast (elected in 2013) and co-chair of the RPR-PARNAS political party (a part of Alliance of Liberals and Democrats for Europe). The world will also remember Nemtsov as one of the leaders of the Solidarnost movement.

He had notable contribution not only to the 2011 mass protests, where he worked closely with Alexey Navalny and Garry Kasparov, but also to a series of reforms in the mid-1990s in Russia when he was in the government for a brief period.

Nemtsov was once considered a likely candidate in presidential elections and was known for being a leading critic of Putin, who he said he feared would have him killed because of his opposition to the Ukrainian war, the International Business Times and BBC said as quoting a recent interview of Nemtsov. The Russian opposition leader was among the strong critical voices raised against the annexation of Crimea by the Russian Federation, defining the action as illegal.

Nemtsov was the first governor of the Nizhny Novgorod Oblast (between 1991 and 1997). In 1997 he became Minister of Fuel and Energy and Russia's Deputy Prime Minister for a year until 1998, during the president mandate of Boris Yeltsin. In 1998, he co-founded the coalition group Right Cause and in 1999, he co-formed Union of Right Forces, an electoral bloc and later on - a political party. Nemtsov was a Russian MP several times in his life.

In 2008 he co-established the Solidarnost movement. Two years later, he co-formed coalition...