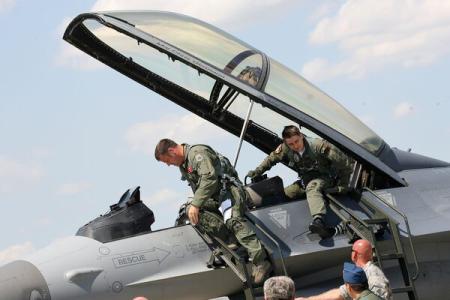 President Klaus Iohannis referred to Parliament the decision of the Country's Supreme Defence Council (CSAT) on the stationing on Romania's territory of Portuguese military resources, the Presidential Administration informed on Wednesday.

According to the cited release, the head of the state referred to Parliament for information, as per law requirements, the CSAT decision on the stationing on the national territory of forces and military means of the Portuguese Army. Under Law No. 291/2007 on foreign armed forces entering, stationing, performing operations or transiting the territory of Romania, the President of Romania approved the Prime Minister's proposals regarding the entry and stationing in Romania, over May ? June 2015, of four F-16 fighter jets and the assigned personnel ? specifically about 150 troops and civilians ? in order to prepare and participate in NATO aerial policing missions.

The Ministry of National Defence will initiate together with the Ministry of Foreign Affairs the necessary steps for the conclusion of an agreement defining the financial terms of this action, the way the host nation is to provide support, and command and control arrangements the Portuguese forces/aerial means can take action in, including interventions against aircraft that fly without authorization into Romania's/NATO's air space.

The decision was taken in the March 3 CSAT meeting. AGERPRES