Ex-Royal Marine of Greek descent killed in battle against ISIS 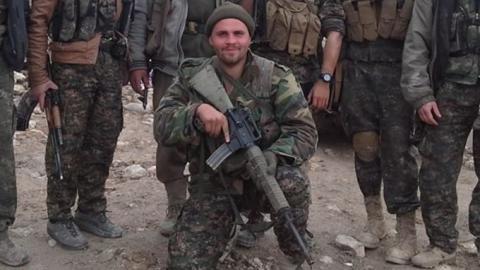 The 25-year-old man, identified as Konstandinos Erik Scurfield, a former Royal Marine from Barnsley, UK, died during a battle against the terror group with the Kurdistan People's Protection Units (YPG) in the Al-Hasakah provice of Syria.

Many of the young man's comrades and friends paid tribute to the brave soldier on Facebook.

John Foxx, an American who fought alongside Scurfield in The Lions of Rojava unit which consists of foreign fighters fighting with the YPG (Kurdistan People's Protection Units), praised his old friend, according to a report by The Telegraph.

"Hands down one of the greatest people I have ever met in my life?I cannot even begin to describe the character of this man. Every day since the moment I was separated from my brothers I have be dreading the news I knew was going to come eventually and it finally caught up to me. You will be avenged my brother," he wrote on Facebook.

Jordan Matson, a close friend of Scurfield who is currently fighting with the Kurds, wrote on his page: "Words cannot describe how honored I have been to fight at your side Sehid Kemal (Konstandinos Erik Scurfield).

We were together from his first day here and you couldn't ask for a more disciplined warrior. Kosta as we call him was from the United Kingdom and was born a Greek citizen. He served both in the Greek army and as a British Royal Marine commando up until he came here.

He served with me in Jezza and Shengal. Kosta volunteered for every attack and guard duty opportunity. He wanted nothing more than to bring the fight to the enemy. I'm going to carry on your legacy brother, I will never forget...