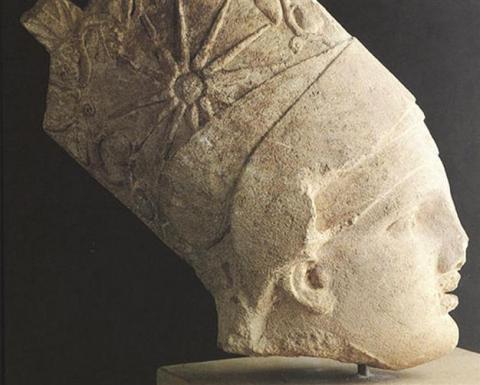 Video footage, coincidentally found by a Turkish collector in a German flea market, which shows excavations on Mount Nemrut in 1965, as well as the life of locals in the region, has revealed a big scandal. The sculpted head of the King of Commagene, King Antiochus, which is now at the Gaziantep Zeugma Museum, was seized while being smuggled abroad by a German.

The footage, shot by German traveler Dr. Lothar Carlowitz, show the Nemrut ruins and excavations at the ancient city of Arsemia in the eastern province of Ad?yaman. It is seen in the footage when the sculpture of Antiochus was discovered underground for the first time. The sculpture was cleaned and covered with a piece of cloth.

After the footage was publicly seen, Archaeology and Arts magazine editor Nezih Ba?gelen said he had used the sculpted head in a book that he had prepared. The footage shows the airfoil of a Turkish Airlines plane. The plane was included in the fleet on Nov. 18, 1946, and was out of the fleet by 1966, implying that the footage was shot sometime before 1966.

German professor Karl Dörner was the first one who went to Arsemia, where the sculpture was found, in 1953, and the footage shows his excavations, so it is definite that the footage dates back to between 1953 and 1966. He worked there until 1986 and released a book about these excavations in 1987, but the head is not mentioned in his book.

File of the sculpture lost in the museum

Under the light of this information, we followed the traces of the sculpture to the Gaziantep Zeugma Museum. Museum officials told us they did not know how the sculpture had come to the museum and it was first registered in their inventory in 1995. The file on the sculpture was lost and could not be found in...