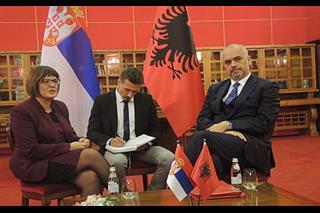 TIRANA - Serbian Parliament Speaker Maja Gojkovic and Albanian Prime Minister Edi Rama agreed in Tirana on Wednesday that both countries were willing to improve their cooperation in the new stage of their relations.

The relations between Serbia and Albania are of utmost significance to the overall relations and stability in the region, the two agreed, according to a release from Gojkovic's office.

Gojkovic, who is on an official visit to Albania, said the primary interest was to improve the relations between the two countries and provide a better life for their people, and that cooperation was a message to the region and the EU that Serbia and Albania guaranteed stability in the Western Balkans.

The EU will be complete only when the Western Balkans is integrated into it, she stressed.

Serbia and Albania do not agree on all issues, but it is important that there is a good basiss for agreements so both countries and the region would move forward, Rama stated.

The lesson that history has taught Serbia and Albania should be used for the future, he underscored.

Gojkovic and Rama discussed also cooperation between young people and the implementation of the memorandum of understanding between the two governments.

Gojkovic invited Rama to support the initiative for Albania's participation in the region youth tourism expo in Serbia, which will be held ahead of the Exit festival, which Rama supported, stressing the importance of cultural cooperation.

Also, they supported the activities by the Serbian-Albanian working group related to infrastructure projects, which will provide more links between the two countries, the release says.

Albania’s Pioneering LGBT Activist: ‘We Should Not Be Second-Class Citizens’

Vucic to meet with Sarrazin on Tuesday

Stefanovic: EU is where Serbia sees its place

Brnabic: Pressure on Serbia over Russia sanctions to become even stronger

Selakovic thanks Brazil for support on Kosovo-Metohija issue

Vucic: Serbia under great pressure due to Russian interests in Ukraine