Idols and the human figure in Islam 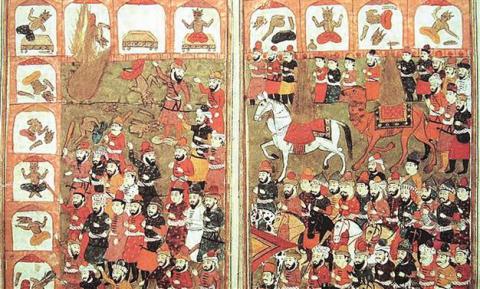 Debate continues about the permissibility of representing the human form in Islam, particularly in the wake of ISIL's iconoclastic attacks on ancient structure in Iraq. In Islamic history, however, an accommodation allowing depictions of humans was generally made From ancient times before Islam it has been known that the tribes of the Arabian Peninsula had their own gods for whom altars or just stones were set up and on which they sacrificed animals. Figurative representations have been dated back to the first millennium B.C. and the remains of large temples have been found. The moon was the most widely worshipped, while a somewhat less influential god known as Allah was called upon on occasion.

"These Arabian deities, which were of diverse nature, fell into different categories. Some of them were personifications of abstract ideas, such as jadd (luck), sa'd (fortunate, auspicious), rida' (good will, favor), wadd (friendship, affection), and manaf (height, high place). Though originally abstract in character, they were conceived in a thoroughly concrete fashion," according to Shaikh Inayatullah in "Pre Islamic Arabian Thought."

Head of a plaster statue from the
Umayyad period. The Ka'ba in Mecca began to assume greater importance than merely being the center of an annual pilgrimage commemorating that of Abraham when idols began to be introduced there by the various tribes in the area. There were, by the time of the Prophet Muhammad in the seventh century A.D., some 360 idols in the Ka'ba. The scholar, Ahmad Mohammad Issa, points out that another Qur'anic verse (Maida 5: 90) tells believers that sacrificing to stones was to be shunned. The Qur'an refers to the stones as idols in the above verse, acknowledging that they...