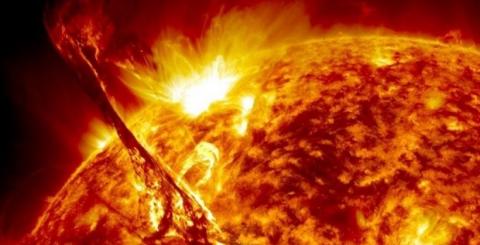 As was announced by US National Oceanic Atmospheric Administration (NOAA), two solar eruptions occurred on Sunday causing a strong geomagnetic storm on Tuesday’s earth atmosphere that could disrupt electricity and telecommunications networks.

However, according to the announcement, no problems have been reported so far.

More specifically the “Solar storm could cause widespread problems in controlling the supply voltage and affect the grid protection systems” warned the NOAA.

At the same time the American space agency Nasa assures that the solar storm did not recorded high levels of radioactivity that could potentially endanger astronauts on the International Space Station (ISS).

“The intensity of this storm will continue to decline in the next few hours, but we can not say for sure how the phenomenon will develop”, explained the head of SWPC forecasts.