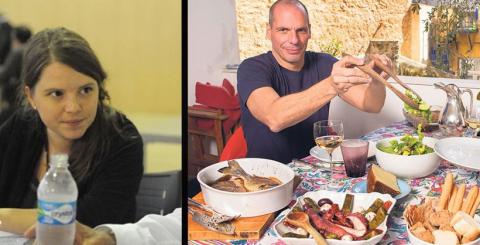 Anne-Sophie Lechevallier, the journalist who interviewed Greek Finance Minister Yanis Varoufakis for French magazine Paris Match about ten days ago, talked to Proto Thema newspaper about the success of the particular article and the controversial photos that accompanied it.

Paris Match published on March 13 an extensive interview of the Greek FinMin, accompanied by photos showing Varoufakis posing with his wife in their stylish Athens house that offers an amazing view of the Acropolis.

Varoufakis' glossy photo shoot attracted a deluge of snide comments in the international media and dozens of sarcastic posts on Instagram.

Reporters made full use of the opportunity to troll the Greek Finance Minister. Simon Nixon, a Chief European Commentator of the Wall Street Journal, wrote: "Crisis, what crisis? Varoufakis takes time out of his hectic schedule of media interviews to pose for Paris Match."

Two days after the publication of the interview, Varoufakis said he was "regretful" over the photoshoot. "I would like for that photoshoot to never have happened? I regret it. I am not fond of the style of these photos," he stressed.

However, the success of the article has been great, according to Anne-Sophie Lechevallier who notes that "even though it's hard to estimate the impact of the interview to the French public," the traffic in the financial section of the magazine's website has increased significantly since the publication of the interview.

Another thing that proves the massive interest for the interview online, is the fact that the French magazine decided to also publish it in English.

Asked to comment on the reactions with regard to the photoshoot and the FinMin's statements after the publication of the photos, Lechevallier...