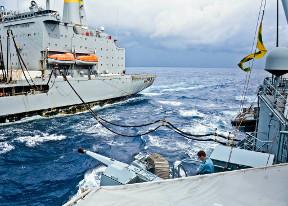 Standing NATO Maritime Group Two (SNMG2) and the Turkish, Bulgarian and Romanian navies are training together in the Black Sea. [NATO]

A NATO-led maritime operation in the Black Sea begins amid growing concerns over Ukraine.

Standing NATO Maritime Group Two (SNMG2) and the Turkish, Bulgarian and Romanian navies are training together in the Black Sea. [NATO]

A military exercise under way in the Black Sea aims to improve naval interoperability between NATO, Turkey, Bulgaria and Romania.

"The training and exercises we conduct with our Allies in the Black Sea prepares us to undertake any mission NATO might require to meet its obligations for collective defence," US Navy Rear Admiral Brad Williamson, the commander of Standing NATO Maritime Group 2, said March 4th at the start of the month-long event.

According to NATO's maritime command, the goals of the operation are to "assure Allies on the eastern flank of NATO that our commitment to collective defence is absolute."

"NATO remains very concerned about the Russia-Ukraine crisis and about ISIL activities, and continues to monitor these security situations very closely," a NATO official told SETimes. "The Black Sea is a key strategic area for the Alliance ? and a major waterway for commercial trade. NATO has a vested interest in maritime situational awareness and maritime security in the region."

The joint training ensures that "NATO and Allied national naval forces will be able to seamlessly...