Five things we learned from Barca's win over Madrid 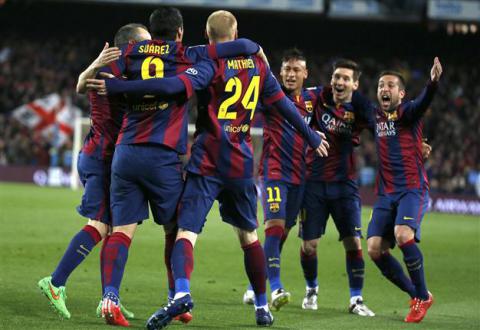 Barcelona took a huge step towards a fifth La Liga title in seven years with a 2-1 win over Real Madrid thanks to Luis Suarez's stunning strike on March 23.

Here, AFP sports looks at five lessons to be learned heading into the final 10 games of the La Liga season.

1. Suarez sinks his teeth into Madrid
The Uruguayan made his Barca debut in the first game between these two sides as Madrid ran out convincing 3-1 winners back in October after completing a four-month ban for biting Italian defender Giorgio Chiellini at the World Cup.

This time it was Madrid who were wounded by the former Liverpool star as he capped his rapid rise in recent weeks with what he described as his "most important goal for Barca" and the one that could land them the title.

2. Ronaldo wins the battle, Messi the war
In the clash between the world's two best players, Cristiano Ronaldo won 1-0 as his first-half equaliser moved him level with Real legend Raul as the third highest scorer in El Clasico history.

However, it was Lionel Messi who emerged victorious on the evening despite a subdued display until space opened up for Barca as Madrid chased the game in the final 20 minutes.

3. Pique's turnaround at the heart of Barca revival
Barca had also scored first at the Bernabeu earlier in the campaign, but a stupid handball inside his own area from Gerard Pique handed them a route back into the game and they took full advantage.

That was just one of a series of errors from the Spanish international in the opening months of the season, but his remarkable turnaround in performance since the turn of the year has been one of the hallmarks of Barca's run of 18 wins in 19...