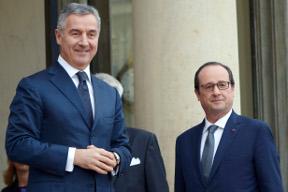 A slew of reforms and awareness campaigns are among the steps Montenegro is taking to secure NATO membership before the end of 2015.

After meeting with NATO Secretary-General Jens Stoltenberg in Paris on March 2nd, French President Francois Hollande said "France's position for the moment is to refuse any new membership."

Montenegro was quick to respond.

"We did not recognise in Mr. Hollande's statement an intention to revise this part of NATO policy related to enlargement,'' Montenegrin Prime Minister Milo Djukanovic said. "This indicates how EU and NATO membership are close, or make the two sides of the same coin. Montenegro has made significant progress as a basis for opening new chapters in the EU process, but needs to be continuously working to the legislative part, and the enforcement of legal provisions."

Djukanovic said, "This month we had some concrete results when it comes to prosecuting those accused of organised crime."

The reforms are in accordance with expectations made clear by NATO at its summit in Wales last September. Montenegro was given a blueprint for what needed to be done in order to gain accession to the alliance this year.

"Montenegro has a unique opportunity to speed up the reform process ... and by the end of the year, to fulfil the necessary criteria for membership," said Olivera Djukanovic, the communications chief for the panel working on the NATO...