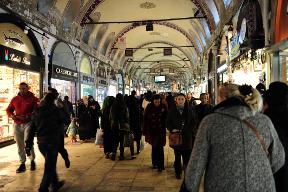 Shoppers make their way through the historic Grand Bazaar recently in Istanbul. The city will host a summit next month with Balkan nations. [AFP]

Shoppers make their way through the historic Grand Bazaar recently in Istanbul. The city will host a summit next month with Balkan nations. [AFP]

The connections between social and economic issues and regional security will be the focus of the Turkey-Balkan Economy Summit to be held in Turkey.

Scheduled for April 10th and 11th in Istanbul, the summit is slated to include the participation of high-level authorities, decision makers and experts from the region, organisers said.

According to authorities, about 500 people from the Balkan region have joined the violent Islamic extremists in Syria and Iraq, coming mostly from Albania, Bosnia and Herzegovina (BiH), Bulgaria and Serbia.

The EU and Turkey are currently working on plans to establish closer co-ordination to prevent the transit of foreign fighters travelling from the EU and Balkan states, to Turkey, and then joining the Islamic State of Iraq and the Levant (ISIL) in neighbouring countries.

Experts interviewed by SES Türkiye emphasised the importance of improving economic solidarity between Turkey and the Balkans to overcome financial problems, such as unemployment, that feed recruiting efforts by violent extremist groups and other criminal networks.

Senada Selo Sabic, a research associate at the Institute for Development and International Relations (IRMO) in Croatia, said the more active extremist groups become, the less security there is for Western Balkan countries.