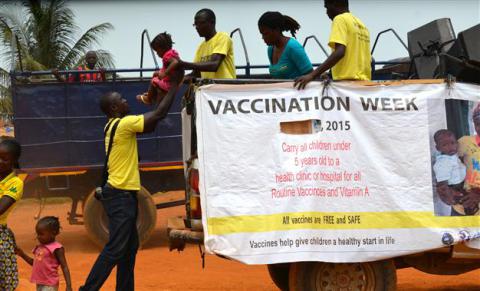 Families arrive at a measles vaccination center in a poor neighborhood of Monrovia on March 19, 2015. AFP Photo

The latest in a string of candidate vaccines against the deadly Ebola virus was proven safe in an early trial in healthy adults in China, its developers said Wednesday.

But while it triggered an antibody response in test subjects, further trials must be held to establish whether the drug actually protects against Ebola, they said.

Dubbed Ad5-EBOV, the vaccine is the first based on the strain of the Ebola virus behind the west African outbreak, according to a paper published in The Lancet medical journal.

"Up to now, all tested Ebola virus vaccines have been based on the virus strain from the Zaire outbreak in 1976" -- the first recorded.

The Phase I trial tested the safety of the drug in 120 people in China's Jiangsu province in December and January, said the study authors from a variety of research institutions, public health bodies and the Tianjin CanSino Biotechnology company.

People were given a low or high dose of the test vaccine, or a placebo.

The researchers then monitored them over 28 days for any side-effects and an immune response through the activation of so-called T-cell infection-fighting white blood cells.

They witnessed "no serious adverse events", the researchers said, and antibodies were "significantly increased in participants".

This showed the drug "has some potential", the team said, though it was not known whether the immune response lasted beyond 28 days, or whether a booster shot would be needed.

There is no licensed vaccine against the disease which has killed more than 10,000 people in west Africa out of nearly 25,000 infected since the start of 2014, mainly in Liberia, Sierra Leone and Guinea.
...