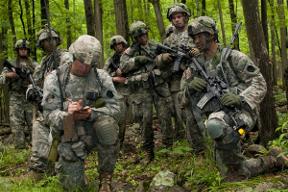 Members of the Maryland National Guard train with soldiers from Bosnia and Herzegovina. [Defense.gov]

Military-to-military co-operation with the US improves several Balkan countries' efforts to advance their defence systems and become NATO members.

Members of the Maryland National Guard train with soldiers from Bosnia and Herzegovina. [Defense.gov]

A military partnership programme run by the US National Guard is helping nations in the Balkans bridge the gap with NATO and improve interoperability.

The State Partnership Programme improves understanding between US and Southeast European militaries, helps the countries accelerate their NATO integration process, improve their capacities to participate in international peacekeeping missions and, above all, contributes to the improvement of bilateral relations with the US.

"The key endowment of the co-operation of the US National Guard with regional armed forces is building capacities through education and training. This mutual co-operation allows for a practical dimension in peacekeeping operations. Secondly, the national guards are a reliable protector for the NATO integration processes of regional countries," Sead Turcalo, an assistant professor at the Faculty of Political Sciences in Sarajevo, told SETimes.

The partnership between the armed forces of BiH and the Maryland National Guard started in 2003.

According to the BiH Ministry of Defence, during more than 10 years of co-operation, the ministry and the Maryland National Guard have held more than 250 events that included the participation of more than 5,000 military and civilian personnel.

"During the last three years the military-to-military programme between BiH and Maryland has been almost doubled. The US finances more than 90 percent of it," the BIH...