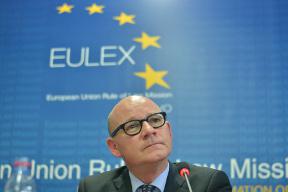 EULEX head Gabriele Maucchi commended the police directors of Kosovo and Serbia for meeting in Belgrade on March 10th. [AFP]

The first meeting between the police chiefs of Serbia and Kosovo is being hailed as a major step in the region's fight against organised crime.

EULEX head Gabriele Maucchi commended the police directors of Kosovo and Serbia for meeting in Belgrade on March 10th. [AFP]

Since Serbia does not recognise Kosovo's independence, the discussions were held under the aegis of the EU Rule of Law Mission in Kosovo (EULEX). A representative of the mission attended the March 10th meeting.

The Serbian Ministry of Internal Affairs said the police directors talked about the flood of EU-bound migrants from Kosovo into Serbia.

"Kosovo Police co-operate with all police in the region, and we hope that the meeting will contribute to the start of the co-operation with the Serbian Police as well," Kelani told SETimes.

The meeting was also held "in accordance with the policies of the European Union, which Kosovo aims to join," he added.

Veljovic told SETimes that such discussions are "important for stability in the region."

EULEX head Gabriele Maucchi noted: "The meeting between the two police directors was the first of its kind."

Maucchi commended the professional atmosphere of the meeting, praised the start of direct contact by Kosovar and Serbian police officials,...