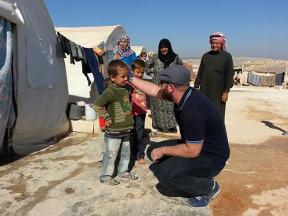 An aid worker from the Balkans comforts a Syrian child at a refugee camp in Turkey. [Jasmin Rexhepi]

Thousands of Syrians living in refugee camps are receiving food, clothes and other charitable assistance from Balkan humanitarian agencies.

An aid worker from the Balkans comforts a Syrian child at a refugee camp in Turkey. [Jasmin Rexhepi]

The crisis facing people displaced by the Syria conflict has galvanised NGOs around the world to action. Balkan-based organisations are among those trying to help the refugees.

According to aid workers from the Balkans, countless Syrians are living in tents, have no schools and clinics for treatment, and face shortages of food, electricity, water and firewood.

Jasmin Rexhepi, from Macedonia, made several trips to refugee camps on the Turkey-Syria border to deliver donations.

"Aid depended on the stock," he told SETimes. "Three ambulances with full equipment and other medical assistance, trailers with winter clothing for children and adults ? [and] another truck with food and blankets."

"It is not easy to pass the borders with the goods and to divide them. But all that is co-ordinated with major international organisations," Rexhepi added.

"Yet the camps are unsafe, and for that reason, our presence was only for a few hours, just to make sure that the aid got into the hands of civilians," Rexhepi said.

Along the border with Turkey there are dozens of refugee camps, most of them filled with children, women and old men, the relief worker said.

"They have no way to earn, so they are literally dependent on foreign aid," he added.

Macedonian NGOs have put out videos and brochures to draw attention to...