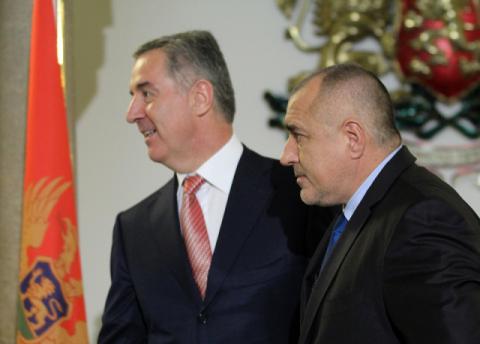 Bulgarian Prime Minister Boyko Borisov has urged all Balkan countries to join NATO and the EU, adding that this is the only move that would bring the much-needed security in the region.

Speaking Friday after a meeting with the Prime Minister of Montenegro Milo Djukanovic, Borisov expressed hopes that Montenegro would join NATO by end-2015.

Borisov, as cited by the Focus news agency, said that he was convinced that Montenegro was fully prepared for NATO membership and had to be given the necessary support to join the Alliance.

Bulgaria's Prime Minister also announced that he had been informed by his Montenegrin counterpart that the country had closed two chapters of the EU pre-accession and was striving to close another six by 2016.

Borisov said that he had discussed with Djukanovic mutually beneficial projects in the spheres of culture, energy, tourism, and infrastructure.

Djukanovic, as cited by the BGNES news agency, stated that the Balkans needed stability first and foremost in order to achieve progress in the spheres of economy and democracy.

He expressed Montenegro's gratitude for the support provided by Bulgaria before all international institutions.

Montenegro's Prime Minister announced that he expected the country to join NATO by end-2015.

As regards EU membership, he said that he was aware of the statement of European Commission President Jean-Claude Juncker that there would be no EU expansion during the term in office of the current EC panel.

"We are trying to interpret this both in a realist mode and an optimistic mode because it is an opportunity to cover new ground. We have quite a lot of work to do in the next four years," he declared.

He said that the two countries were to enhance bilateral...