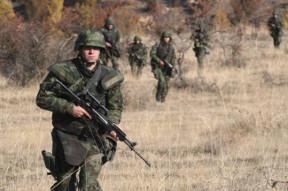 Troops from Macedonia and Serbia participated in the Platinum Wolf 2015 exercise at the South Base in Serbia. [AFP]

Troops from Macedonia and Serbia participated in the Platinum Wolf 2015 exercise at the South Base in Serbia. [AFP]

Military-to-military co-operation between Macedonia and Serbia has increased since US military forces have gotten involved in developing the two countries' capacities for participation in international peacekeeping missions.

Aleksandar Radic, a military analyst at the Euro-Atlantic Initiative in Belgrade, said the US military is creating training centres to foster co-operation between the two countries.

"The US military has a very important role in this because of its direct financial support as well as because it is bringing knowledge and experience that leads to gaining better capacities to develop a regional centre for training for peacekeeping operations in the South Base in Serbia. This opens additional space for co-operation with Macedonia through joint training," Radic told SETimes.

"The US has recognised the natural advantages of the area between Serbia and Macedonia," Radic added.

He said that in the near future, training and preparation within the NATO Partnership for Peace Programme will be conducted at South Base and then at Krivolak in Macedonia.

The Macedonia and Serbia militaries have co-operated in the past, most recently in the Platinum Wolf exercise at South Base. Serbia's forces have taken part in several PFP exercises in Macedonia. All of the co-operation aims to strengthen interoperability between the two countries.

"Serbia and Macedonia have developed bilateral co-operation ? to improve...