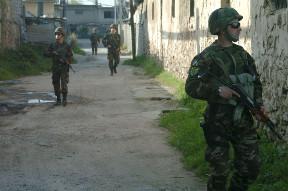 Joint training is part of the co-operation programme. [AFP]

Joint military activities between the US National Guard and regional militaries contribute to countries' defence capacities and relations with NATO.

Joint training is part of the co-operation programme. [AFP]

The US has been aiding countries in the region to improve their defence and military capacities as well as their relations with the NATO. The main tool for this goal is the US State Partnership Programme, in which the US National Guard partners with states from the former Soviet Bloc.

"In the process of upgrading the capabilities of the armed forces of small, transitional countries, co-operation with developed, democratic countries and their military structures [is necessary]," Zvonimir Mahecic, an external expert at the Institute for International Relations in Zagreb and a retired colonel from the Croatian military, told SETimes. "Through joint activities, militaries as well as civilians of small countries are getting a chance to learn from the experiences of military structures that had passed through significant development and adjustment to the needs of combat and non-combat operations of the 21st century. This kind of co-operation represents a great chance to transfer knowledge and achieve implementation. One example of this type of co-operation is between the Minnesota National Guard and Croatia."

Mahecic emphasised that the partnership with the Minnesota National Guard reflects the position and activities of Croatia within NATO.

"There is no doubt that this contributes to better security, not only for Croatia, but to the security of this whole part of Europe," Mahecic said.

According to the Croatian Ministry of Defence's Department of...