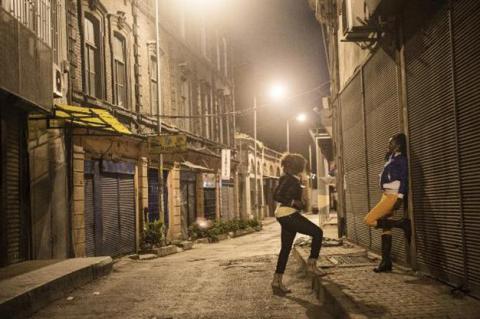 Hürriyet photojournalist Murat ?aka spent a year in the notorious streets of Istanbul?s Aksaray and Kumkap? neighborhoods to document the life of African sex workers. Here he tells their stories: Table of wolves

This Turkish expression refers to a dog-eat-dog world. In this regard, Aksaray and Kumkap? are the table of wolves in Istanbul. Kumkap? is a neighborhood that is home to many African immigrants who are trying to survive in a foreign country after they fled their homeland.

Boasting a constant cacophony from peddlers and police sirens, Aksaray is also home to neon-lit bars that double as venues for prostitution. The neighborhood is within walking distance to Kumkap?, meaning African sex workers are frequently seen in the bars.

A street to nowhere

These are the views that I got used to. Exactly a year ago, I missed my bus in Aksaray. While searching for an alternative way to return home, I found myself on a side street. In the middle of the chaos of Aksaray, the street had an authentic atmosphere. The sex workers, all of whom were Africans, were waiting for customers on the street, but seemed shy and fearful.

They were just 30 meters away from me. But it took me three months to cover that distance to photograph their lives. At first, I was only observing the street, looking for a door that may open to their closed, troubled worlds. Sometimes I just wandered in the street. Because ? after everything they experienced here ? they had learned something: Never trust a white man.

When I started this project, there were 15 African sex workers on the...

Dems say oust Trump or he’ll betray again; ‘He is who he is’