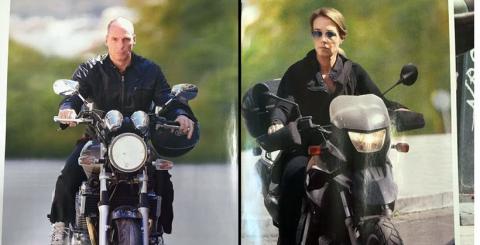 Yanis Varoufakis, Greece's rock-star finance minister and his beautiful wife Danae Stratou, a successful artist from one of Greece's most well-known industrialist families, were spotted last week on separate occasions riding their motorcycles around Athens.

According to OK magazine which published the photos, the famous couple that has been at the centre of public attention for the past few months, still keeps its daily routine, which includes morning exercise at the terrace of their home under the Acropolis.

They also use their motorcycles every chance they get for driving around the city, a source told OK magazine.