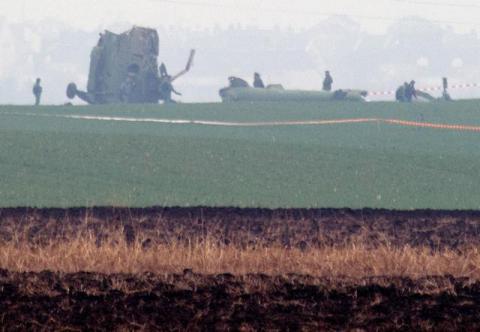 BELGRADE -- The responsibility for the crash of a military helicopter in Belgrade last month was primarily with the members of its crew, it has been announced.

There are also "doubts that part of the responsibility lies with other military and civilian personnel," the Higher Public Prosecution said on Friday.

The crash of the military aircraft on March 13 killed all seven persons on board.

B92 has seen the prosecution's document that states investigators found alcohol in the samples of blood and urine take from the pilot, Omer Mehic.

The post mortem showed there were 0.68 milligrams per milliliter of alcohol in Mehic's blood, and 1.30 mg/ml in his urine.

The prosecution said these were "initial findings" and added they were obtained during the first phase of establishing the facts and circumstances under which the accident occurred, based on the analyses and opinions of a commission set up to examine the causes of the crash, and other documents related to the accident.

"The prosecution will conduct investigative actions against a number of persons in order to fully identify all relevant facts related to specific events," said a statement.

The data from the report should be made available to the public, and "both the Prosecutor's Office and the Ministry of Defense agree on this," it was said.

"Of course I'm against it. Who in their right mind would think of that?"

The Crisis Staff will no longer hold press conferences every day

Crisis Staff: "Lifting of measures possible only when the numbers get better" VIDEO

The number of victims in Beirut is growing, the estimated damage - USD 10-15 billion

"Nestorovic withdrew due to pressure and terrible insults"

Vucic: "The situation is not easy for Serbia"

Zoran Gojković: That would be extremely dangerous, the measures remain in effect

"Now we face with the critical and crucial moment"