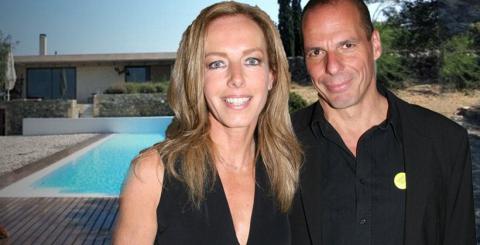 Artist Danae Stratou, wife of Finance Minister  Yanis Varoufakis states that she was unaware that she had to have a special seal from the National Tourism Organization (EOT) when renting out her property. She states her ignorance of the relevant procedure  due to the fact that she lived abroad for the last two years, however she is willing to correct her mistake and pay any fines that she may have incurred.

The living room of the Makrygianni Street home, housed in a neoclassical building, that is up for rent.

The Varoufakis couple rented out their houses to tourists on the Airbnb site without having the special EOT seal that authorized them to do so. Not having a sign could result in a 50,000-euro fine. Stratou wrote to Proto Thema, admitting her omission and saying that she is willing to pay the fine.

"I remind you that, until recently, we were two Greeks that lived and worked abroad and I think that you should assess the situation accordingly," she says, explaining that the mistake was due to not being aware of the relevant legislation.

The pool from the property at Aegina

Stratou said that the money that had been raised from the rent had been included in the couple's 2014 tax statement. According to Stratou, the rent accrued was low.

Stratou says that the Aegina home was rented out just once after an ad on a site abroad. She says that the rent money would be included on her tax statement.

Danae Stratou said she rented out her home in Aegina just once for ten days in 2014.