PAO has easy ride in final to win another Greek Cup 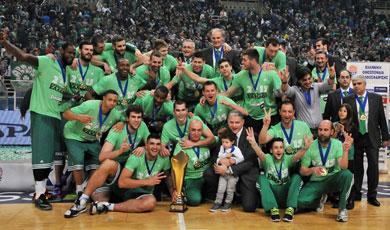 The game was fairly one-sided as Apollon proved unable to match its big opponent on the day, with the contest seeming sealed from the first half that ended 39-20 in the Greens? favor. Panathinaikos even gave its top-pick players a rest in the second half, allowing some of its youngest stars to shine, too.

Loukas Mavrokefalidis was the leading scorer for Panathinaikos with 13 points and the Most Valuable Player of the final, but Toarlyn Fitzpatrick was the game?s top scorer notching up 19 points for Apollon.

While the final was an easy proposition for the Greens, given also that the draw favored them in that it led to the game being held at their home court, but the way to the final had indeed been very difficult for the champions.

In the quarterfinals, held before the start of the league in early October, a depleted Panathinaikos (without James Gist) that was about to play its first competitive game under its new coach at the time, Dusko Ivanovic, hosted behind closed doors the well-prepared Olympiakos that appeared on paper to be the favorite for the match. And yet Panathinaikos snatched victory by one point (77-76), with a slam dunk by Esteban Batista a few seconds from the end.

Then Olympiakos challenged the result of the game in court, seeking to be awarded the ticket to the semifinals due to the presence of banned Panathinaikos owner (and then president) Dimitris Giannakopoulos. Originally the Reds had it their way, but the supreme sports court (ASEAD) ruled that the...