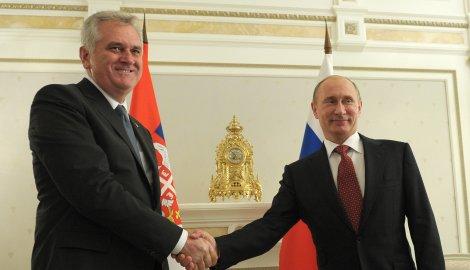 Serbian army will march on the Red square in Moscow for the first time in history.

President Tomislav Nikolic, as Supreme Commander of the Armed Forces, accepted the invitation from Russian Defence minister Sergey Shoigu, and decided that Serbian soldier will participate in army parade in May 9th, on the celebration of the Victory day in II World War.

According to information from Moscow, Russia invited armed forces from 16 "friendly countries", members of "anti-Hitler coalition", including Serbia.

Some of the most significant leaders of EU decided to boycott Putin because of the Ukraine crisis.

The question is how will EU look at Serbia's participation in Russian parade.

Aleksandra Joksimovic, director of Centre for foreign policy, says for "Blic" that EU will not be making some particular moves against Serbia, but also "will not be looking on that situation benevolently".

- EU is very sensitive about communication with Russia. But, Serbia is pressured by Russia also, not just by EU. It's evident that Nikolic represents the strongest bond between Serbia and Russia. He wants to be the leader in those relations - says Joksimovic.

Former Serbian ambassador in Turkey Dusan Spasojevic says that "no one can blame Serbia's decision to participate in Putin's army parade".

- We know there will be presidents and PM's from EU and NATO countries like Slovakia, Greece and Norway - says Spasojevic.

Ukraine is getting stronger? More weapons are coming

Slovenia lose to Serbia in second round of Nations League
How Long Does Apple Support Older iPhone Models? (infographic)

Norwegians to visit Turkey with an ID, no passport