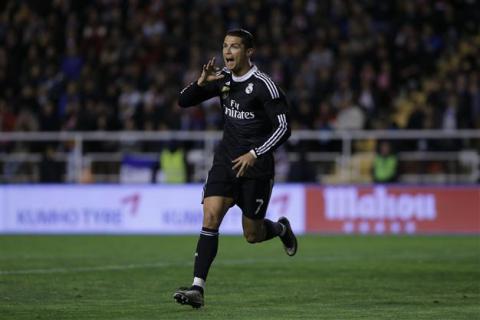 Cristiano Ronaldo headed his 300th goal for Real Madrid in a laboured 2-0 La Liga victory at neighbours Rayo Vallecano on Wednesday that kept the gap on leaders Barcelona down to four points.

Fresh from thrashing Granada 9-1, when Ronaldo hit five, the European champions needed a win at Rayo's Vallecas stadium after Barca strolled to a 4-0 home victory over Almeria to open a seven-point advantage over their arch-rivals.

In-form Luis Suarez scored twice and Lionel Messi ended a three-game goal drought, with Marc Bartra also getting on the scoresheet at the Nou Camp.

Real struggled to exert any control over lowly Rayo and missed a host of chances before Ronaldo netted his 37th La Liga goal of the campaign with a header from Dani Carvajal's cross.

The prolific Portugal forward, five clear of Messi at the top of the scoring chart, is the third player after Raul (323) and Alfredo Di Stefano (307) to reach 300 goals for Real, but has needed only 288 matches, compared with Raul's 741 and Di Stefano's 396.

Ronaldo had earlier been booked for a dive in the penalty area and will be suspended for the La Liga game at home to Eibar on Saturday.

James Rodriguez made it 2-0 with a sharp finish from Ronaldo's layoff to lift Real to 70 points, five ahead of third-placed champions Atletico Madrid, who won 2-0 at home to Real Sociedad on Tuesday.

"We tried to pressure them with more intensity high up the pitch but in the first half we were not convincing," Real coach Carlo Ancelotti told a news conference.

"In the second, we were more complete, we played well and we deserved to win," added the Italian.