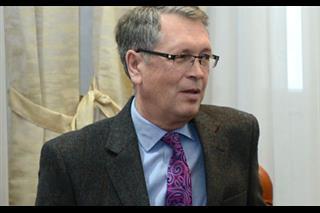 BELGRADE - Serbia's decision to send troops to the Victory Day parade in Moscow shows that dignity is not an empty word for Serbs, and Western pressure - however strong - cannot upset the brotherly relations between Serbia and Russia, says Russian Ambassador to Serbia Alexander Chepurin.

In a holiday interview published by Belgrade-based tabloid Informer, Chepurin said that the Russian leadership appreciates Serbia's decision to take part in the May 9 parade on Moscow's Red Square, which will mark the 70th anniversary of the victory over Nazism.

The position of the Serbian leadership and President (Tomislav) Nikolic, which we appreciate highly, has demonstrated that dignity is not an empty word for Serbs, just like historical conscience, common sense and national interest are not empty words either, the Russian ambassador elaborated.

The Moscow parade will involve 70 Serbian soldiers, 64 of whom will be marching on the Red Square in a ceremonial echelon.