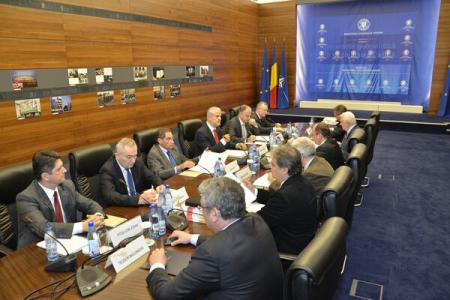 The former foreign ministers of Romania gathered on Friday, on the initiative of the incumbent head of diplomacy Bogdan Aurescu, in the first Consultative Council of the Foreign Affairs Ministry (MAE), to discuss the country's foreign policy priorities in its relation with the eastern neighbourhood, MAE informed AGERPRES in a release.

The MAE underlines that such meetings are informal dialogue platforms aiming at using the existing expertise 'to consolidate and develop the ministry's process of strategic reflection on current topics of foreign policy.'

'The current situation in the international environment, especially from the point of view of security in a broader sense and precisely in our eastern neighbourhood require the most efficient possible action of the Romanian diplomacy; from this point of view, you can have a vital contribution, given your considerable institutional and professional expertise,' Aurescu told his predecessors in the opening of their meeting.

According to the MAE, the former foreign ministers hailed the resuming of the Council's works and agreed that Romania's foreign policy should be 'a matter of national consensus and cohesion.'

The participants pronounced themselves in favour of a foreign policy strategy to be assumed as a national project and to result in a growth of Romania's international profile and in the improvement of the way the Romanian state is...