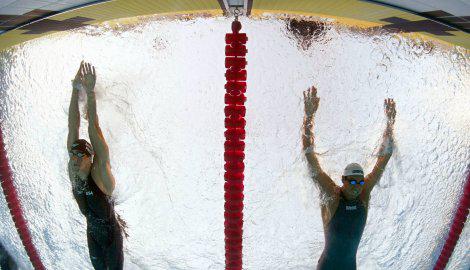 Famous Olympic final in 100 meters butterfly style from 2008. games in Beijing was fixed! The win went to Michael Phelps despite Milorad Cavic was faster and deserved the gold medal.

This claim was stated by Mark Spitz, the greatest swimmer of all times.

- I saw the mail from "Omega", which was the official time measurer in Beijing Olympic games in 2008. In that mail was very clearly written that Phelps lost the race - Spitz stated for British "Telegraph".

In that famous clash between Phelps and Cavic one tenth of a second decided, and Phelps needed the visctory so he could win 8 godl medals to break the record set by Mark Spitz.

Spitz won seven gold medals in 1972. Olympic games in Munich, and Phelps won eight in Beiging 2008. the medal he won vs Cavic was his 7th.

However, after the race official photographs appeared, on which we could all see that Cavic touched the push button first. Serbian swimming association protested immediately, but FINA rejected the appeal because "Cavic didn't press the button in a right way".

Since then there were many controversy about this final, and Spitz was the one who was brave enough to talk about that injustice.

- If "Omega" was the official time measurer, how come the result wasn't available few seconds after the race, like in every other case? I believe Phelps lost that race - Spitz said.

Serbian swimming association will react after these claims, and once again try to correct this injustice. No one from "Omega" company wasn't ready to comment these claims.

Who is Mark Spitz?