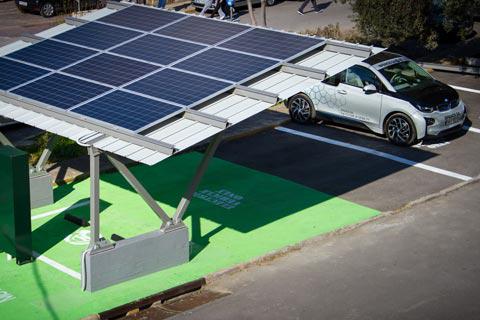 Greece?s first solar-powered charging station for electric cars ensures 100 percent green energy and was recently launched by the Piraeus University of Applied Sciences. It is still in the experimental stage and is being used for training and research purposes.

The charging station only uses solar power, which is turned into electricity and can charge electric car batteries, representing the first step for electric vehicle owners to no longer have to be reliant on power from the main electricity grid.

?We tried to make a charging station that operates exclusively with renewable energy sources so that electric cars, the cleanest vehicles currently in operation, can work on truly clean energy,? says Professor Ioannis Kaldelis, from the Department of Mechanical Engineering?s Workshop for Renewable Energy Sources and Environmental Protection, which is responsible for the project.

?Let us not forget that most of the electricity in Greece is produced mainly with lignite and also with natural gas, both of which are imported,? adds Kaldelis. ?Making the charging station was easy. In a covered area, we installed 3 KW photovoltaic panels, which produce enough energy to charge one car in winter and two in the summer when there?s more sunshine. Drivers can either recharge their vehicles directly at the station or fill their batteries.?

The charging station, which is located outside the workshop on the Elaionas campus, was created by the workshop (the idea belongs to Giorgos Spyropoulos), with the help of undergraduate and postgraduate students. It was bankrolled by the university and private companies.

?We saw that electric vehicles are gradually gaining ground so we wanted to come up with a solution to the charging...