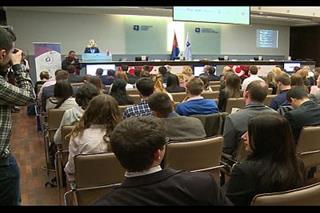 BELGRADE - For the past two decades, Serbia has ranked first in the region - and second in the world - in emigration of young and educated people, the participants of the Youth Economic Forum at the Chamber of Commerce and Industry of Serbia warned on Wednesday.

"The trend of rising youth unemployment has been ongoing since 2008 and there are no indications of it stopping," Radovanovic said at the forum, whose media sponsor is the Tanjug news agency, adding that the youth unemployment rate in Serbia is higher than that in neighbouring or EU countries.

Nearly 80 percent of young people wait for employment for over a year, and young people increasingly believe that it is impossible to find a job in Serbia and are leaving Serbia as a result, he said.

Radovanovic said that the state must do something about this and enable young people to find jobs after education.

EDUCATION SHOULD BE TAILORED TO NEEDS

Serbian Deputy Prime Minister Zorana Mihajlovic stated on Wednesday that the education system needs to be tailored to the needs in the coming 50 years, and not only to the plans that Serbia has for this and the next five years.

Mihajlovic said addressing young people at the meeting dubbed "Youth Business Forum 2015" at the Serbian Chamber of Commerce that the education system needs to follow the trends of the global development, adding that all together, including...

Dacic: Serbia to get new parliament by end of July