Shops in Istanbul's Grand Bazaar evacuated by the police 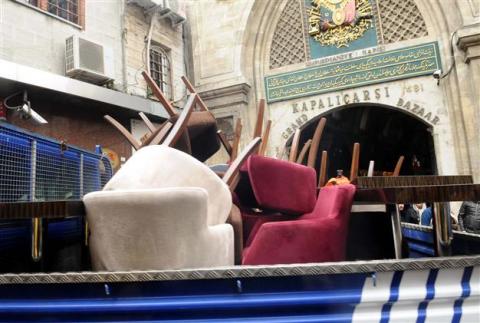 Police have forcefully evicted the renters of several shops inside the historic Grand Bazaar, Istanbul's largest covered market, just one day after detaining 20 shop owners who refused to leave the bazaar in protest of a renovation project.

Some 80 shops inside the Sandal Bedesten section of the Grand Bazaar were evicted under the control of the riot police on April 22.

The shops were owned by the General Directorate of Foundations and rented by the shop owners with long-term contracts. A group of shop owners held a protest outside the Bazaar against the decision on their shops.

The renters had received a notice from Fatih Municipality demanding they evacuate their shops before April 22, on the grounds that the area will be renovated.

The renters claimed they should be involved in the renovation project and claimed the tender for the area was too expensive for the local shop owners to remain in the bazaar.

The riot police were sent to the area as the shop renters said they were determined to stay in the bazaar.
The police entered and raided the bazaar after blowing one of the historical doors open with an explosive late April 21, one shop owner among the occupiers told Do?an News Agency. The police detained 20 people who were later released.

"[The police] told us not to stand behind the door. We told them, 'we are here until we die. We will burn ourselves if necessary.' We were actually thinking of protesting by...