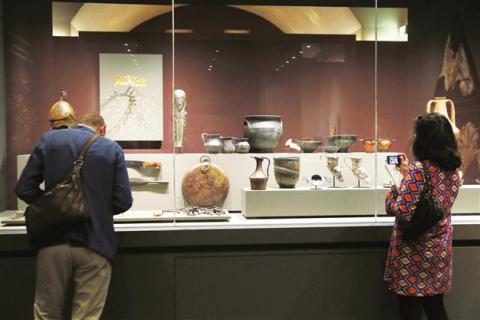 Exquisitely crafted gold, silver and bronze objects are on display at the Louvre Museum in Paris, giving visitors a rare glimpse of the ancient Thracian culture that produced them.

Many stories still remain untold about this refined civilization whose citizens included Orpheus, the mythical son of a Thracian king, and the legendary gladiator Spartacus, who led an uprising against Rome.

"Ancient Thrace is most famous for its unique goldsmithing works," Bulgarian exhibition commissioner Milena Tonkova told AFP ahead of the opening last week.

One of the exhibition highlights is the Panagyurishte ritual beverage set, the most prized possession of these ancient people who lived from the 2nd millennium B.C. to the 3rd century A.D in the Balkan Peninsula.

Made of 23-carat gold, it consists of a phial, an amphora with centaur-shaped handles and seven rhytons and drinking vessels carved in the form of women's and animals' heads, with a total weight of six kilograms.

For years Bulgaria has been exhibiting gold and silver Thracian treasures found on its territory in museums around the world, from Mexico to India and Japan.

However, Francoise Gaultier, the director of the Louvre's Department of Greek, Etruscan, and Roman Antiquities, said, "It won't just be the umpteenth exhibition in France of Thracian gold, it will offer the general public an opportunity to gain broader insight into this culture."

Beyond the stunning wares, this latest exhibition aims to paint a broader picture of the Thracians lifestyle by showing the tools used to carve the pieces.

It also showcases for the first time the exact replicas of four Thracian tombs from central Bulgaria, where some of the precious finds were...