Day of War Veterans celebrated at the MApN 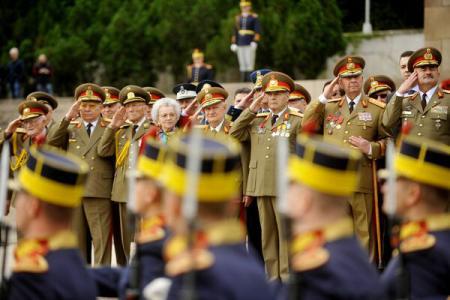 The Day of War Veterans was celebrated on Tuesday, at the headquarters of the Ministry of National Defence (MApN), in the presence of Defence Minister Mircea Dusa in a show featuring folk songs performed by well-known artists of the genre, such as Veta Biris, Gheorghe Rosoga, Sava Negrean Brudascu.

The show was dedicated to veterans, wounded, invalids and descendants of those perished in the Second World War, as well as for the personnel of the Ministry.

Mircea Dusa congratulated the veterans and offered them a memento on behalf of the MApN ? a military compass.

"MApN and MAI [Ministry of Internal Affairs] are dedicating this show to you who have made sacrifices so that Romania is what it is today. (...) You are not old at all, you are always youthful, you are those who respect national values the most, those who have put their lives in peril so that Romania have her borders", said the Minister of Defence, at the end of the event.

During these days, the Ministry of National Defence and the Ministry of Internal Affairs are organizing special events dedicated to the Day of War Veterans, at the anniversary of 70 years since the ending of the Second World War in all the large garrisons nationwide.

On Wednesday, beginning with 7.30, in Bucharest, the Veterans' Marathon will take place and at 8.30, at the Monument for the Country's Heroes, situated on the esplanade of the Carol I National Defence University, a military and religious ceremony of laying wreaths will take place.

Beginning with 10.30, at the Palace of the National Military Center, the Solemn Gathering of veterans, wounded, invalids and descendants of those perished will begin, as well as an exhibition...

PM Citu: Romania, fully prepared to enter Schengen area
EduMin Cimpeanu: Opening schools, not conditional upon teaching staff getting vaccinated
PM Citu: Efficiency is the operational word, especially in this period of constraints due to pandemic