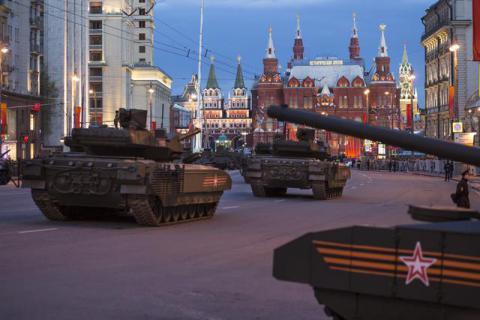 The Russian Ministry of Defense last month posted photographs of Armata on it website, but with the turret covered and only the platform visible, AP is reporting.

The new tanks today "rumbled down a broad Moscow avenue" on their way to Red Square, as part of rehearsals ahead of Victory Day celebrations.

The May 9 parade will see participation of 16,500 soldiers and 200 pieces of military equipment.

BBC reported that the Armata tank "has an unmanned turret and a 125mm smooth-bore cannon that can fire guided missiles as well as shells."

The three-man crew has better protection than in existing Russian tanks, and will be housed in a reinforced chamber away from the main gun, the British outlet quoted Russian media.

Zvezda TV said that the tank's chassis is adaptable as a platform for other weapons systems, while RT reported that it "could evolve into a fully robotic battle vehicle."

Its computer technology, speed and manoeuvrability are said to be far superior to those of the T-90, the current mainstay of the Russian army, BBC said, adding that "Russia plans to bring in about 2,300 Armatas, starting in 2020, to replace Soviet-era tanks."

AP said that "the pioneering design potentially puts the Armata ahead of Western competition, but it is yet unclear whether the Russian weapons industries will be able to meet the ambitious production plan for the...