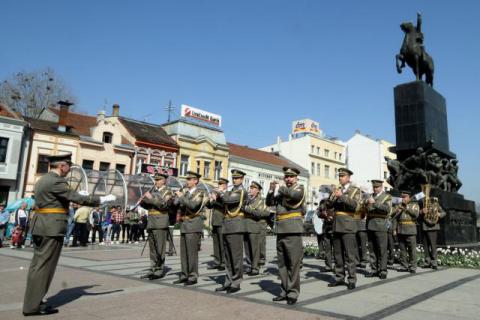 The parade will be held as part of events marking Victory Day, the Serbian Defense Ministry said.

The orchestra will be sent to Kiev based on a decision of Serbian President Tomislav Nikolic, it has been announced.

A statement added that in 2014, the Military Orchestra Nis performed in cities throughout Serbia "and the also delivered prominent performances last year at international events in Bosnia-Herzegovina, Bulgaria and the Russian Federation."

On Tuesday, Foreign Minister Ivica Dacic told a state broadcaster RTS talk show that he too would travel to Ukraine, where he will on Friday attend a Victory Day event on behalf of the Serbian government.

Dacic said that Serbia "has a balanced approach" and takes part "in all events marking victory over fascism."

Meanwhile, Serbian President Tomislav Nikolic will be in Moscow on May 9, where members of the Serbian Army's Guard unit will take part in the Victory day military parade.