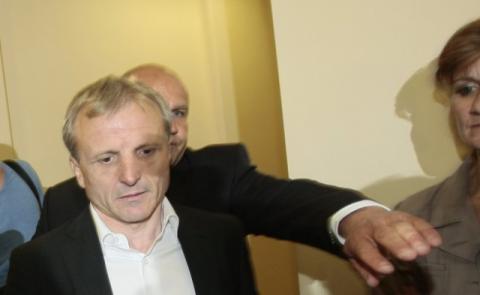 The Specialized Prosecutor's Office has for the second time submitted to court an indictment against businessman Grisha Ganchev and nine other people for participation in a criminal group specialized in tax crimes.

The prosecuting authority believes that Ganchev masterminded the group.

According to the indictment, the crime group committed tax fraud worth over BGN 700 000 through uninvoiced sales of sugar produced at sugar factories in Burgas and Devnya, according to reports of the Bulgarian National Radio.

The indictment was first submitted to court on December 30, 2014 but the Specialized Criminal Court returned it for revision due to procedural irregularities.

The prosecuting authority says that the omissions have been removed and the charges against the participants in the criminal group have remained unchanged.

Grisha Ganchev is the owner of the Litex FC and the Litex Commerce company, based in the northern Bulgarian city of Lovech.

In May 2012, Grisha Ganchev was arrested and charged with running an organized crime group specialized in tax fraud and with issuing a murder threat.

The businessman was subsequently released on a bail of BGN 500 000.

The organized crime group was intercepted in May 2012 after a joint operation of the Chief Directorate for Combating Organized Crime (GDBOP) of the Interior Ministry and the National Revenue Agency (NRA).