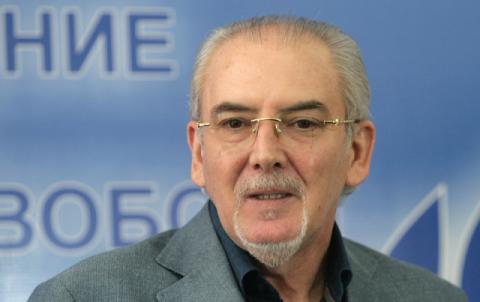 Lyutvi Mestan, leader of Bulgaria's DPS, has called for a swift integration of Macedonia into the EU to help solve its long-standing problems. Photo by EPA/BGNES

Bulgaria's two biggest opposition parties, have demanded a more rapid accession of Macedonia and other Western Balkan nations into the EU to boost "Europeanization" there.

Positions of the Bulgarian Socialist Party (BSP) and the Movement for Rights and Freedoms (DPS) largely overlapped during a debate in Parliament while lawmakers were holding a regular sitting on Wednesday.

"In the Balkans there are problems among different peoples that can be solved through EU membership. Bulgaria shouldn't look on Western Balkans' membership in the EU as a misunderstood national interest," according to a declaration by the DPS read out loud by the party's head Lyutvi Mestan.

Both parties have called on Bulgaria not to support a 5-year ban on membership for Macedonia and several neighbors.

The Patriotic Front, a nationalist coalition which backs the governing axis, has also echoed their position.

Its co-chair Krasimir Karakachanov has urged a more prominent role of Bulgaria in helping Macedonia into the EU:

"Today the government in Skopje must know that the shortest way to Brussels is not via Belgrade, Pristina, Tirana or, even less, Ankara, but via Sofia."

Alternative for Bulgarian Revival (ABV), a left-wing party which a minister in the government, has demanded that Bulgarian authorities prepare an analysis about the challenges facing Bulgaria with regard to a possible escalation on Macedonian territory.

Under conservative GERB's previous tenure in 2009-2013, Bulgarian-Macedonian relations underwent a major crisis with Sofia tying support for Skopje's EU membership to some conditions.

The latest debate comes after a series of protests and a violent incident in Kumanovo, northwestern Macedonia, where 8...