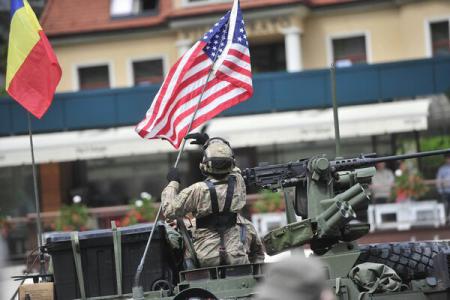 The multinational training exercise with live simulation and live fire exercises SARMIS-15 will be carried out over May 15-June 6, in the Brasov garrison and at the Land Force Combat Training Center in Cincu.

"SARMIS-15, which is part of the series of joint exercises taking place both in Romania and abroad as part of the "Atlantic Resolve" operation is a multinational exercise in which 1,500 troops are set to participate with 200 pieces of military hardware from Canada, UK, Romania and the USA at their disposal," reads a release of the MApN on Friday sent to AGERPRES.

The Romanian Land Forces participate with staff from the 2nd Getica Infantry Division and the 2nd Mountain Huntsmen Brigade, supported also with staff and technical means by the Romanian Air Forces.

The US troops from the 2nd Squadron of the 2nd Cavalry Regiment of the US Army on May 13 and 14 have conducted the "Cavalry March" that began in Mihail Kogalniceanu (Constanta, where the US has a military base) and ended in Cincu (Brasov County). AGERPRES