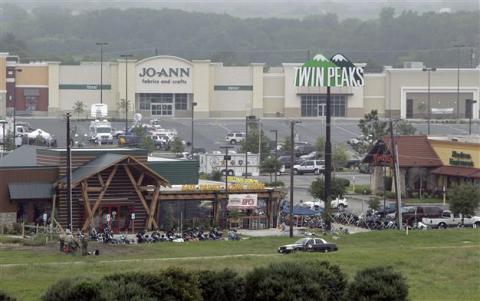 Some 170 rival motorcycle gang members have been charged with engaging in organized crime linked to capital murder after a mass brawl at a Texas restaurant left nine people dead, police said on May 18.

Officials in the central Texas city of Waco said they were still processing the unusually large number of suspects after May 17 melee, which started in the restroom of the Twin Peaks Sports Bar and Grill and eventually spilt into an outdoor patio area and the parking lot.

Officials said as many as five gangs fought each other with knives, chains and guns in front of terrified restaurant patrons.

Authorities revised downward a figure for the number of suspects taken into custody, which earlier on Monday was put at 192.

"We took over 170 individuals to our convention center where they were detained and the investigation continued there," said Swanton.

The gang members could face a number of counts including possibly capital murder, which is reserved for particularly egregious killings that can carry the death penalty.

The detainees "have been charged with engaging in organized crime in reference to a capital murder case at Twin Peaks," Swanton said. "That basically says that 170 people have been involved in capital murder."

"It's a capital murder because of the number of victims that were killed in one episode here."

Police had been bracing for trouble after learning that the bikers planned to meet at the Twin Peaks.

Swanton said police had made their concerns known beforehand to Twin Peaks, but the bar - part...