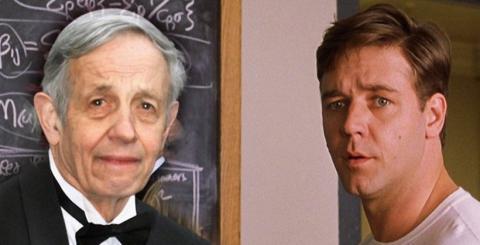 Game theory pioneer and Nobel Prize laureate John Nash, 86, whose life, works and painful struggle with schizophrenia formed the basis of the Academy Award-winning movie “A Beautiful Mind”, died on Saturday in a car accident in New Jersey.
Nash perished along with his wife Alicia, in a crash on the New Jersey Turnpike.
He shared the 1994 Nobel Prize in economics with John Harsanyi (UC-Berkeley) and Reinhard Selten (Bonn University).
Director Ron Howard turned his tumultuous life into the big-screen movie with Russell Crowe in the starring role. The film, which picked up the Oscar for best picture in 2001, was based on the 1998 best-seller “A Beautiful Mind,” by Sylvia Nasar.

Speaking of … game theory and “game theorists”, here’s a Tweet on Nash’s passing by the latest ‘celebrity economist’, and Greece’s foremost example of the species: