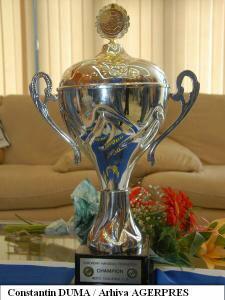 This is the first time when HC Odorhei win a European trophy, becoming the third Romanian team to win the Challenge Cup in the last couples of years, after Steaua (2006) and UCM Resita (2007, 2008, 2009).

For the Portuguese team this was its third lost European final, after being defeated in the 1994 Champions League final and the 2005 Challenge Cup final.

In the ongoing season, the team coached by Vlad Caba started the third round playing Britons Cambridge HC, which they defeated 35-14 and 43-21 (both home matches); in the second round they beat Luxembourg's Red Boys Differdange, 33-20 and 30-16 (both home matches in Odorheiu Secuiesc); in the quarter-finals they defeated Ukraine's ZTR Zaporozhye, 26-18 at Ujgorod and 22-20 at home, while in the semi-finals they outperformed another Portuguese team,...

Borrell: "Russia's blockade of wheat exports is a war crime"