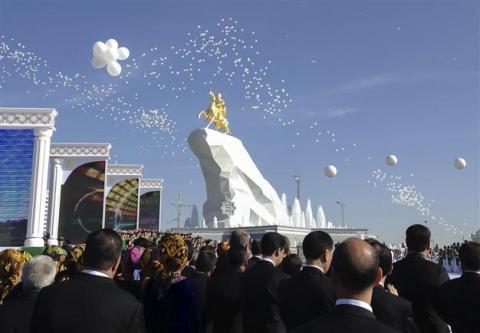 People gather in front of a monument to Turkmenistan's President Kurbanguly Berdymukhamedov during its inauguration ceremony in Ashgabat, Turkmenistan, May 25, 2015. Reuters Photo

The isolated Central Asian state of Turkmenistan on May 25 unveiled a large gold statue of President Gurbanguly Berdymukhamedov riding a horse, in a move echoing his predecessor's cult of personality.

The 21-metre (69 foot) statue, located in the capital Ashgabat, depicts the president mounted on his favourite horse, Akkan ("White Khan"), and saluting with his right hand.

Cast in bronze and covered in 24-carat gold leaf, it is the first such monument of the president of the energy-rich ex-Soviet country since he came to power in 2006.

The statue is called "The Protector", Berdymukhamedov's unofficial title.

The former dentist came to power after the death of Saparmurat Niyazov, who built a gold statue of himself that rotated with the sun's movements.

It was taken down several years after Niyazov's death, but has since been moved to the outskirts of the capital.

Niyazov, known for establishing a personality cult, also renamed months after members of his family and wrote a "book of the soul" that all school children were expected to learn by heart.

At the unveiling of the new statue, which Berdymukhamedov did not attend, the parliament's speaker Akdja Nurberdieva said it was the result of "multiple suggestions from simple people, work collectives and public organisations," in order "to mark his services to the homeland".

The ceremony featured a rendition of the national anthem, soldiers taking an oath of loyalty to the president and a flock of white pigeons being released into the sky.

Last year, the parliament named horse-lover Berdymukhamedov a "Master Jockey and Mentor". He was later recognised as a "People's Horse Breeder" at a day of equestrian events in...