Pseudo-mufti wants … referendum to prove number of … ‘Turks’ in Thrace 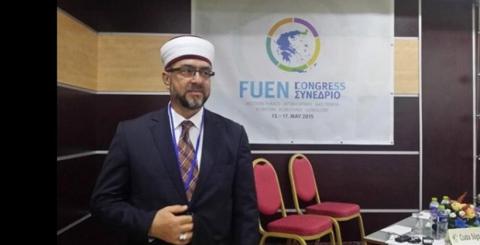 A pseudo mufti in the northeast province of Thrace wants a … referendum. And not just any referendum, but one to show people and other countries, as he maintained, “who and how many Turks there are in western Thrace.”

The statement belongs to one Ahmet Mete, who used the “referendum” idea to prove, as he claimed, that “150,000 Turks” live in the northeast Greek province.

The venue for the pseudo-mufti’s provocative statement was a recent conference by the CoE-affiliated NGO Federal Union of European Nationalities (FUEN), which was held in the city of Komotini, home to the largest concentration of the Muslim minority in Thrace.

The Muslims of the specific province were exempt from the 1923 “exchange of populations” between Greece and Turkey, with their descendants today enjoying all the rights and benefits of Greek and EU citizenship.

Mete, who describes himself as a “proud Pomak-Turk”, was shown posing at the conference in front of the irredentist flag of a so-called “Independent Western Thrace”, while he’s also been photographed in the past at events by the ultra-nationalist (and Central Asia-themed) “Grey Wolves” movement in Turkey.

The term “pseudo-mufti” is derived from the fact that he isn’t appointed by the Greek state, given that muftis retain certain judicial functions dealing with family and inheritance law. The Greek state is obliged, as per the 1923 Lausanne Treaty, to extend the “milder” form of Sharia law to members of the Muslim community in Thrace that wish their family law and inheritance issues to be adjudicated by such a quasi-religious, quasi-judicial official.

Official Turkey – especially the so-called “deep state” there – demands that the muftis in EU member-state Greece are elected by vote. Of course, muftis in Turkey are … appointed by the state.

The Greek foreign ministry and local officials have also emphasized that “elections” for pseudo-muftis are rigged, whereas participation in the unsanctioned election process is low nonetheless.

Posters for the conferences, in fact, referred to Komotini by its Ottoman place name, “Gumulcine”, and Thrace as “western Thrace”, another favorite Turkish “Deep State” moniker.

The FUEN conference was also attended by at least two “professional” members of a self-described “repressed minority”, Evgenia Natsoulidou and defrocked Orthodox priest Nikodimos Tsarknias, both well known proponents of “Makedonec”. The latter term, in typical irredentist Balkan style, refers to an undetermined number of people living in the Greek province of Macedonia who claim kinship to the dominant ethnos in the former Yugoslav Republic of Macedonia (fYRoM), but are absolutely “allergic” to any reference of a “Slavic” ethnicity or a “Slavic” language.

In answer to a press question, the Greek foreign ministry indirectly pointed to financing by Ankara of the FUEN fiesta.