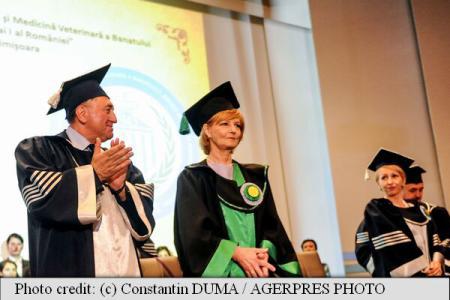 "Her Royal Highness is a personality we wanted to join the University's elite body by the award of the degree," stressed University rector, Professor Dr. Paul Pirsan.

Her Royal Highness, Princess Margareta of Romania, was awarded on Friday the honorary degree of the Timisoara-based University of Agricultural Sciences and Veterinary Medicine of Banat "King Mihai I", with the academic institution thus marking 70 years since its coming into being under a Royal Decree signed by His Majesty King Mihai I of Romania.

"Her Royal Highness is a personality we wanted to join the University's elite body by the award of the degree," stressed University rector, Professor Dr. Paul Pirsan.

Princess Margareta thanked the hosts for the distinction, pointing out that this is a recognition of the role played by her forerunners.

"Thank you for awarding this title to me, at the 70th anniversary of the University of Agricultural Sciences and Veterinary Medicine of Banat. I see this distinction as a tribute to my forerunners. In 150 years of existence, the Royal House has always considered education as a priority. I know that none of the 70 years has been easy for the University," said Princess Margareta at the acceptance of the academic title. AGERPRES