Remembering the Heysel Stadium stampede of May 29, 1985 (photos) 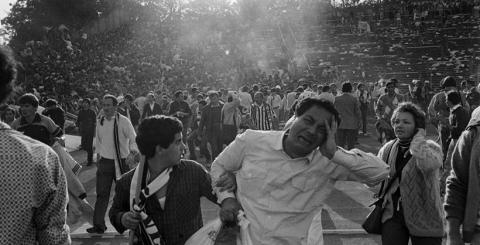 Thirty years have passed since one of the most tragic stadium disasters in sporting history that ended with the death of 39 football fans, the youngest aged just 11 years: 32 from Italy, foru from Belgium, two from France and one from Northern Ireland. The stampede took place on the eve of May 29, 1985, prior to the European Cup Final between Juventus and Liverpool at the Heysel Stadium of Brussels.

Despite around 600 injuries and 39 dead corpses lying in the stadium car park, UEFA ordered the game to go ahead for the sake of public safety. Naturally, the game took place under a tense climate and Juventus won 1-0 after a penalty from Michel Platini.

Following the game, then-UEFA president Jacques Georges and UEFA General Secretary Hans Bangerter were called to face the music and threatened with imprisonment before being discharged. Johan Mahieu, in charge of policing the stands though he was inexperienced, was given a six-month suspended sentence for negligence as was Albert Roosens. 25 Liverpool fans were extradited from the UK with 14 found guilty of voluntary manslaughter in April 1989. These fans spent a year in jail each and English clubs were excluded from Europe for fiveyears.