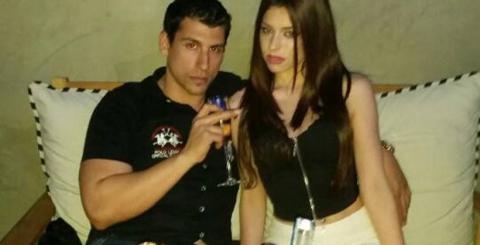 A new Mykonos version of Dan Bilzerian in the making or nouveau riche nightmare?

The latest video to go “viral” on Greek-language cyber-space shows “Ms Thrace” — as from the province in NE Greece — being soaked with 15 expensive champagnes while dancing at a Mykonos beach bar.

The serious-looking lad doing the pouring is identified as one Manolis Kolonellos, while the model, recently crowned as “Ms Thrace” is co-ed Irini Sterianou.

Along with the subsequent television and Internet hype and exposure that the duo enjoyed for their uber gratuitous behavior on Greece’s party isle came reactions and criticism. Keep in mind, Greece is returned to a recession this year and is feeling the pangs of cash-crunched state coffers.

“I didn’t expect that all this fuss would be created. Certain bitter comments related to the crisis, and against me, were heard, which I didn’t like at all. But it’s ok, I can’t worry about what whoever says,” the shapely Irini said.

The champagne-loving Manolis added that “Irini is my girlfriend; we’ve been together for a year, and no one has the right to criticize how she parties with her boyfriend.”