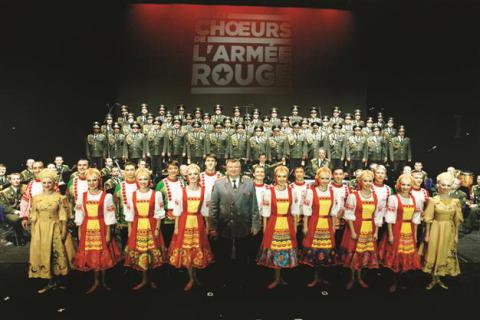 The Russiann Red Army Choir will take the stage in Istanbul on June 13 and in Ankara on June 15.

The Russian Red Army Choir, known as the Alexandrov Ensemble, will be in Istanbul and Ankara this month.
The choir?s repertoire includes surprise Turkish songs. The Istanbul concert will be on June 13 at Zorlu PSM, while the Ankara concert will commence on June 15 at the Ankara Congresium.

The concert in Istanbul will kick off with the Turkish National Anthem at 9 p.m. The songs the choir will perform includes many Turkish songs, with a dash of popular foreign songs, such as ???k?d?m? by Tarkan, ?Genç Osman? by Bar?? Manço, ?Happy? by Pharrell Williams and ?Get Lucky? by Daft Punk.

The ensemble is named for its first director, Alexander Vasilyevich Alexandrov, who died in 1946. However, its formal name since 1998 has been Academic Ensemble of Song and Dance of the Russian Army.

Having traveled widely throughout the former Soviet Union, from the Arctic north to the sands of Tajikistan, the choir performed at the 1937 International Exposition dedicated to Art and Technology in Modern Life held in Paris, France; there, it won the Grand Prix, the highest honor bestowed by the jury.

During World War II, the ensemble gave over 1,500 performances at both Soviet fronts, entertaining troops about to go into battle, at gun emplacements, airfields and hospitals.

As the world?s largest army choir, it has taken stages in the world?s most prestigious venues over the last few years, performing a wide repertoire of Russian folk songs, classical works, Mozart and Verdi operas, pop classics such as ?Sex Bomb? and ?Hey Jude,? as well as well- known Russian songs like ?Katyusha,? ?Kalinka,? ?Kernina? and ?Ave Maria.?

Founded to boost the morale of soldiers and the public during wartime,...