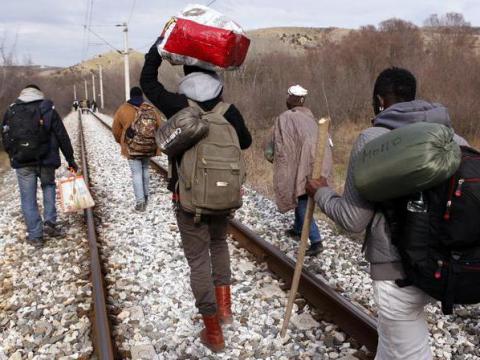 Police said they had launched a probe after Britain's Channel 4 News programme broadcast a report about hundreds of migrants from countries like Syria, Afghanistan and Yemen being held for ransom by gangs in at least one Macedonian village, alleging that local police has been colluding with their captors.

"We still don't know and are investigating whether suchan  event involving the kidnapping of several hundreds of migrants did happen, like the reports say, and were they indeed kept for several days," said police spokesperson Ivo Kotevski.

The Channel 4 News report said that migrants who were initially promised safe passage in train carriages through Macedonia are being pulled off the train in their hundreds by a gang near the town of Kumanovo, forced to walk two hours to the village of Vaksince and held and abused there in an overcrowded house until they pay a ransom.

The report alleged that the gang is led by a boss of Afghani origin, nicknamed 'Ali Baba', who is colluding with the local authorities.

Police said they have raided the house in Vaksince mentioned in the report several times in the past, as well as several other locations, after receiving reports that illegal migrants might be held there.

They said that dozens of people have already been charged with human trafficking, both foreign citizens and locals, and are already serving sentences.

But they said that the smugglers are hard to catch as they often change their hideouts and manage to escape raids.

Police spokesperson Ivo Kotevski admited that Macedonia is struggling to cope with the influx of migrants from conflict-hit countries like Syria, Iraq and Afghanistan, and that numbers have quadrupled in the past few months.

He said that in the past week...