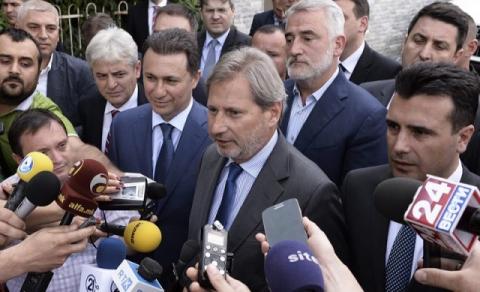 Macedonia's government and opposition leaders have failed to achieve a breakthrough in their talks to resolve the country's political crisis, the European Commission said.

"The talks were open and detailed, but did not lead to a final agreement yet," the Commission said in a statement late on Wednesday after the leaders of Macedonia's four biggest parties ended their talks in Brussels with the EU Enlargement Commissioner Johannes Hahn and the the Head of the EU Delegation Ivo Vajgl.

At their previous meeting in Skopje on 2 June the four leaders had agreed that snap elections should be held by the end of April next year, Hahn said back then. He also said "a kind of transitional period" had been agreed.

In the period until the vote, changes to the election law and voting lists should be implemented, according to Macedonian media reports.

"The European Union urges all parties - in the interest of their country and its citizens - to find a lasting political compromise without any delay and come forward with concrete proposals to this end, building on the agreement already reached in Skopje on 2 June," the Commission said.

The EU executive also said that the reforms, to which all party leaders had committed, must be urgently implemented.

"This is essential for the country to make any progress on the Euro-Atlantic path," the Commission said, adding it remained ready to mediate in any further talks.